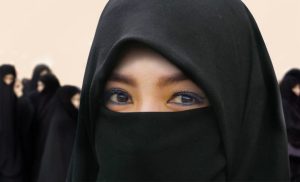 The shocking take-over of Afghanistan by the Taliban reverberated around the world. The main question was what would this mean for women? Afghan women have a prior history of being invisible.  Just as they were beginning to acquire some rights and freedoms, they are again plunged into the abyss. I watched them on the evening news, night after night, saddened by the outcome. Hiding behind the compulsory chador or niqab the women are hardly figures of exuberance, more like ghosts from a terrible past. It got me to thinking, how long will it take before these women are allowed to become visible again.

It was not so long ago that western women were invisible, it happened differently. Our bodies were exposed, but our personalities were crushed under the weight of patriarchy.  It reminded me of a 1960s song that conveyed a similar message in relation to suburban life. In the song our homes were described as little boxes. As women were locked into those suburban boxes.  The notion resonates with bodies being locked into the yards of black or blue cloth, the chador, niqab or burqa.  Women like dolls are wrapped up and packaged.    How do they work, half-blinded by the blackness?

We, the western women have shared much in common with our Muslim sisters, but they may not know it.  We were not invisible in body, but we were demolished in spirit and soul.   We were the domestics, cleaning, cooking and looking after children without pay or reward.  This is not the same as house-keeping or mothering, real  caring and nurturing are innate.  What I am speaking of is domestic slavery and exploitation, we were like robot dolls.. This view of women was recounted in another 1960s song by the popular Cliff Richard, the words described the situation perfectly, “Got myself a cryin’, talkin’, sleepin’, walkin’, livin’ doll”, the second verse speaks directly to the nature of imprisonment. “I’m gonna lock her up in a trunk so no big hunk can steal her away from me”. No loving or honouring was included in these lyrics,  just rank possession of the sublime object.

The story of invisibility is not unique to the Muslim women who must hide behind the veil. All women were veiled.  However, today’s Muslim women remind us of where we have come from.   My generation of women experienced a form on invisibility that obscured the person, but made the body available.  It was called the swinging sixties, the time of the sexual revolution and the discovery of the contraceptive pill. As women, we were made more available than ever before in history.  Men took full advantage of the new science and sexually used and abused us against our will.   All repressions on sexuality appeared to be lifted and people called it liberation… Liberation for whom?  Any woman who did not comply with the new demands was labelled frigid or a misfit. We were covered in a veil, but the veil was like an icy mist that would come and go over the landscape.

In the west attractive women were not physically invisible, to the contrary any attractive young woman would be encouraged to use her attractiveness to get ahead in the world.  At the time I was a junior in the film industry, how to get a quick promotion was easy, but not all of us wished to comply. With this in mind, many were locked out of their employment and left to fend for themselves.   Smart women did well, they found their voice.  A lot of women   complied, but for many it backfired, because as soon as they reached any kind of maturity, say age 20, they were no longer needed, there was a new cohort of pretty young girls to replace them on the casting couch.

Jump ten years and Muslims were immigrating into Europe and bringing their values with them. Some young western girls found honourable young men and turned their faith to Islam.   Muslim women appeared to have more protection and Muslim men had more respect, but we never got to know the full story.   By the 1970s feminism was rife in the western world, but Islamic women did not participate and we did not invite them. They seemed too entrenched in patriarchy.

Feminism did not reach the Middle East until much later, it had a difficult birth and a tedious evolution. The oppression and possession of Muslim women was different and it was not truly made visible until after the 1979 Iranian Revolution.  Prior to the Revolution Iranian women had enjoyed a lot of western style freedoms, but beneath the surface there was an insidious regime exploiting the workers and stealing the spoils.  The old Shar was very accommodating to western influences. In the 1930s, the Shar had banned the veil and ordered police to remove women’s headscarves.  Iran was central to the west’s attack on Islam, but we failed to see what was happening. The west appeared to be offering freedom, but what it was really pushing was colonization.

After the revolution, Iran’s new leader the Ayatollah Ruhollah Khomeini decreed that all women had to wear the veil and the Islamic dress code was not just back in fashion it became mandatory.   All women regardless of religion or nationality were required to wear the hijab. Notably, the revolution came about, not through culture or religion, but due to oil,  Iran had barrels of it and America wanted it.  However, America’s presence in Iran would come to an end.  The Americans and the British had a long history of attempting to take possession of Iranian oil, but finally they capitulated. The Iranians hated America and subsequently they were sympathetic to the most extreme interpretations of Islamic Law.

In 1979 protesters outside the US embassy voiced their anger towards the US.  Revolutionary students took dozens of US embassy staff hostage while thousands of anti-US demonstrators surrounded government buildings and filled the streets with chants and protests. After the revolution women were largely confined to the home and wearing the burqa outside of the home became compulsory. A quarter of a century later women had become used to the code of dress and they were demanding the authorities maintain their compulsory laws regarding the wearing of the hijab.  Following the western occupation, the burqa and hijab made them feel protected.

It is commonly accepted that in order to change the society, you must first embed the changes into the culture and it takes roughly twenty-five years for any change to occur. Looking back, we cannot separate the events of the Iranian revolution from those of the US and British occupation.   It was the circumstances of oppression from the west that led to the establishment of an Islamic state that would be equally, if not more oppressive.

There are no strict rules regarding the full veil in the Qur’an and many Muslim women reserve the right to choose which parts of the body they wish to cover and how they will be covered. The liberal view is that women should be free to choose the cover that suits them.

Prior to the Taliban’s invasion in 2021 women were exercising many freedoms, in dress, education and the ability to hold important positions as well as being able to voice their opinions. Yet sadly, within days of the Taliban take-over women were back to wearing the burqa, chador or niqab.  This dramatic change sets an unfortunate precedent for the reigniting  of  womens’ oppression, not just in Afghanistan, but anywhere in the region.   Muslims are far more united under the umbrella of Islam than they are under the state and dress is a key religious signifier in the unity of the  Ummah, especially in times of insecurity.

During the festival of the hajj, the most important festival in the Islamic year, the men wear two pieces of white cloth and the women wear the burqa, chador or niqab and they are usually dressed in black. It conjures up medieval visions of the dark and the light, metaphors once used for the good and the bad in Christendom.  The woman was always perceived as the temptress and was often dressed in black, while the man was in the colour of angels.

Personally, I do not like the full veil, but I respect those who choose to wear it. I cannot truly imagine what it is like to see the world through a piece of muslin cloth.  To me the full veil is the outward expression of male domination and it dehumanizes the female, but many Muslim do not agree with me and they have a right to their own opinion.

We should not shy away from beauty and there are many beautiful head coverings.  Today,  veils still play a significant role in many religions, including Orthodox Judaism and Catholicism as well as in Islam with all three religions having had their roots in climates where head coverings are conducive to the environment.   We must take into account the context. Islam began as a small religious community in Medina in the Arabian Peninsula.  It was established by the prophet Muhammad (c. 570–632 CE) and it gradually spread across the Middle East to Saharan and sub-Saharan Africa, then to Central Asia, and parts of Europe.   In these times women did not wear the burqa, the covering was a veil or scarf as was the tradition long before the inception of Islam. It is only recently that some Islamic states, such as Iran, Afghanistan and more, have begun to require all women to wear the full veil.   There are issues of freedom here and there are significant health issues as well. The body needs some exposure to light and the sun,  without it vitamin deficiency will occur and the body will not be allowed to breathe.

In the end, it is modesty that holds the key to the female’s  choices and some will wear clothing that completely covers the body from neck to toe, but which is not traditionally Muslim.  In addition, many western women will dress in a manner where there is nothing to distinguish the western women from the Muslim woman. Long gowns go in and out of fashion as do head scarves.  Today, on the western streets many young girls will wear modern dress, often jeans or pants and simply cover their head with a scarf. Many of the clothes are tight fitting and would be frowned upon by the older generation.  Also, today, many western people are converting to Islam and this is bound to have a significant impact on Islamic law, jurisprudence and the way Muslims dress.

Across the world men have been telling women how to dress since antiquity. The struggle over what women wear has been well established in history. During colonization many authorities attempted to stop Muslim women from wearing traditional dress.  In Islam there is no one size fits all. In some parts of Islam, if men wear silk and gold, it is considered to be haram as these two things are meant only for women. In other parts men will wear brighter colours or just pastels.  In many respects women are idolized by Muslim men and this can be manifest in the promulgation of extreme controls. Guidelines differ, many Muslim men are happy to allow women to travel alone, use jewellery, perfumes and makeup, while others are not.

For women it is not easy being a Muslim. At the intersections of all traditional practices, we find misogyny, oppression and brutality.  In addition, Islamophobia makes being a Muslim woman very difficult in western society. There is a lot of ignorance and even more arrogance  that impacts on the Muslim community.   Women need to feel confident and they need to feel safe and they should be permitted to dress accordingly.