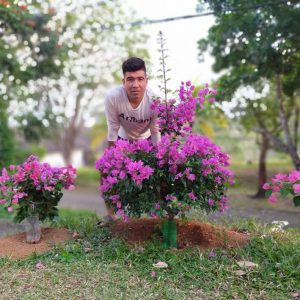 Risk: At risk of being tortured and killed by the Taliban if returned home.

Needed: A group of five friends to support him.

Saifullah and his father were arrested by the Taliban. His father sacrificed his life and helped Saifullah escape from there. He had no other option but to leave his family behind and flee to Indonesia by boat to save his life.

Since 2014, he has been living in limbo and he hopes to have a chance of living in a peaceful country where he can live with freedom. The good thing is that he has the needed funds available to be sponsored in Canada, and he is looking for a group of Canadian friends who can help him start his life again.

Saifullah was born on January 1, 1994, in the Jaghori district of the Ghazni province in Afghanistan. His father was a truck driver, and he used to work with his father as a driver’s assistant.

The Hazara people of the region have long been targets of persecution and massacres because of their culture, religion, and love for education. Saifullah and his father used to carry goods from Ghazni to Jaghori. On August 19, 2014, they loaded the truck with school Materials like books, chairs, and tables alongside with some shop goods.

“When they uncovered my eyes, I found myself in an old yard. Then they started investigating and beating me and my father badly.”

After searching their truck, the Taliban found a document that Saifullah’s father had hidden, and Saifullah had no idea about that document. Saifullah and his father were then put in a room and were told that members of the Taliban would wait for their Mawlawi (leader) to come and decide the punishment.

It was midnight on August 20, when Saifullah’s father awoke him and told him to escape through the small window that was towards the yard. His father told him not to follow him while running away from there. After jumping outside through the window Saifullah started running away.

“I suddenly heard gunshots which scared me more and I kept running. Later on, I waited for my father but he did not come.”

Since Saifullah was at risk of being captured again and killed, he continued his way until he arrived on the highway. He stopped a car and shared his story with the driver who was a Hazara. The driver drove Saifullah to Kabul and took him to a Hazargi hotel names Band Amir Hotel. He took the hotel owner’s phone and contacted his mother.

“My mother was crying and I told her that I did not know where my father was.”

On August 21, 2014, Saifullah contacted his mother, and she told him not to return. She also told him that she would send his uncle to help him find a way to escape from Afghanistan immediately. Since the Taliban knew everything about Saifullah, they could easily find and kill him in Afghanistan. After his uncle arranged for a people smuggler, Saifullah flew from Kabul to New Delhi, India on August 30, 2014. From there, he went to Malaysia by plane and then on to Pekanbaru, Indonesia on September 6, 2014.

On September 8, 2014, he was brought to Jakarta by car, and he registered himself with the UNHCR on September 13, 2014. With no right to work or way to support himself, he went to Balikpapan Immigration Centre to ask for assistance, and on October 28, 2014, he was transferred to a detention centre there.

While living in the detention center, he was busy learning the English language, doing exercise and playing football to keep himself healthy and positive.

Fortunately, on February 28, 2018, he was released from the detention centre and transferred to a community house in Tanjung Pinang.

As a refugee, Saifullah cannot get proper education, work, drive and even open a bank account. He has been living in uncertainty since 2014, and he is trying to get himself out of this uncertainty to live a normal life. There is no option of returning to Afghanistan either since the Hazara people are not safe there. The only way for him is to resettle in a safe country like Canada where he can start his life again, He says:

“I hope to start my second inning of life somewhere I can breathe with freedom, justice and basic human rights. I hope that kind Canadian citizens will help me start my life again in Canada.”

Since he is officially certified as a refugee by the UNHCR – unlike the vast majority of the world’s refugees – he qualifies for Canada’s private sponsorship program. Another good thing about Saifullah is that he is FULLY FUNDED.

Reach out and discover how wonderful it is to privately sponsor a good person to start a new life – with your help – in Canada!

Thank you for your support. And help spread the word by sharing this post!

This is just so beautiful. What a wonderful gift I have received.  Thank you children. Thank you teacher.  (From an orphanage in Uganda). 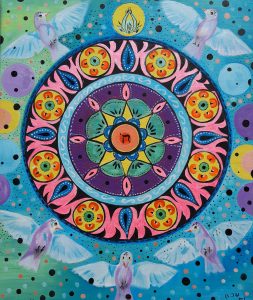 Mandala  by Yishkah
I have to wonder how many people would call themselves an environmentalist, but they would not claim to be religious. Yet the fundamentals of elevating the environment to a transcendental position are the same as those involved in most religious practices. When we hold something dear to us, we become part of an existential whole whereby we are transcending our own subjectivity (anthropocentricism). We are, in other words, transcending materialism and seeking a different kind of experience. (We develop all our relationships in relation to others). Experiments have shown that animals do this a lot better than humans. Many religious practices rely on the ancient texts, and instead of invoking the need to reinterpret the texts based on our experiences, we condemn all religious practices. Religions need to evolve like everything else. Our indigenous brothers and sisters have adapted their religions far better than most and they have done so without losing the primary meaning of honouring the Earth, the universe, life and their ancestors. These are all religious practices. Science ,and in particular quantum physics, has prompted us to examine human consciousness and the possibility that the universe might also have a level of consciousness. NASA has found that some sounds in the universe replicate the human heartbeat. Some people have likened this to the heartbeat of God.??? This gives rise to the most common of questions. What or who is God? Certainly not an old man with sitting on a cloud somewhere. However, critics dismiss the existence of God before asking what is God? God, and its many variations, is the name for something we cannot see and do not understand. Humans love naming things! Anyone who believes in the existence of the universe is actually believing in God, which makes the whole protest against religion seem a bit silly and unwarranted.