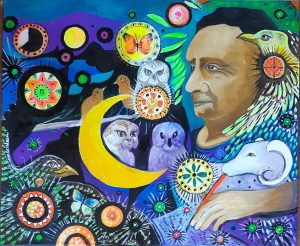 Easing the pain of losing someone you love is never easy.  I have tried to focus my energy on creativity. It is what my dear friend Keith Simons would have wanted.  Above is the memorial painting completed in his honour and in the memory of a truly remarkable man.  I hope it will serve to remind us all of the goodness and wisdom that Keith carried throughout his earthly  journey.

Below is the Obituary, due to be published shortly in the Upper Yarra press. 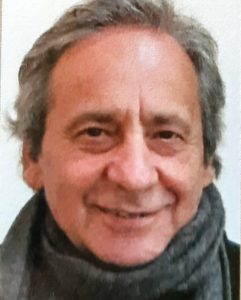 Keith Simons has been my closest and most treasured friend for more than thirty-four years. We were born and grew up in the same local in East London and shared may of the same experiences. There are no words to express the loss of this kind, gentle and loving man who managed to bring so much joy, peace and harmony to the lives of all those who knew him.

Keith was born in 1949 and started life in London’s squalid inner east. His grandparents were Jews originally from the Ukraine and only spoke Yiddish and Russian. Later Keith’s parents and their two children, Keith and his sister Marcia, moved to a double story, semi-detached house in the outer London suburb of Upton Manor where he lived and went to school.

Life in England was hard in the post-war years, but it was especially difficult for children with an ethnically different background.  England was a predominantly Christian country and schools in those days had compulsive religious studies.  Keith and a few others were given exemptions, but this only accentuated the difference. Non-Christian children were segregated and treated as inferior. Like many Jews in Britain, Keith grew up being bullied and beaten by local thugs and it would be those many terrifying experiences that would serve to shape his adult life of compassion and understanding for others, especially those of difference.   In his book “Quest”, Keith describes how he was made to feel like an outcast and how it impacted on his relationships.  Keith was never afraid to tell the truth and his writings have helped many who have encountered similar difficulties.

From an early age Keith had what he called mystical experiences. He wanted more from life than pure existence.  He saw the many problems in the world and wanted to fix them.  After leaving school he started an apprenticeship at a Jewelers in London’s famous Hatton Garden, but he left to travel Europe in a search for the meaning of life. He moved across Europe and finally settled in Australia.

Keith explored many esoteric religions and beliefs. He became a follower of Swami Vivekananda and Sri Aurobindo and their philosophies formed the basis for much of his early writing.  He also became adept in the art of astrology.  Keith attended ashrams and took lessons from renowned spiritual teachers then finally devoted his life to Buddhism and the works of Rudolf Steiner. Keith was also a great supporter of Aboriginal culture and he actively worked to promote the drawings of Aboriginal artist Lisa Kennedy and others through his role as Director of the Harmony Festivals.

Most people will remember Keith Simons as the friendly soul who had a bookshop in the main street of Warburton. The shop was a gathering place for lovers of all things spiritual and offered weekly mediation sessions in the rooms upstairs. Keith excelled as a meditation teacher.  He finally found purpose and meaning in scholarship, leadership and meditation.

Keith Simons wrote several books relating to his studies including the popular Biography of a Russian Yogi. Other works include, Poetica Esoterica, a work that explores consciousness and sensory experience.  Elucia, a book based on incarnations as they have occurred in ancient and modern history and Parelsitus, an experiment in interdimensional communication. Out of all his many experiences, Keith rated the Harmony Festivals as one of his greatest achievements.

Of the Harmony Festival Keith wrote:

The 2014 Warburton Harmony Festival was a highlight event of my life…   It represented a model and archetype of universal harmony, tolerance, empathy, friendship, dialogue, honesty and love. My involvement in bringing this to fruition is something I feel proud and satisfied about. I feel grateful to all those who believed in it and contributed to its manifestation. For me it also fulfilled a prophetic dream I’d had many years before. I am aware that this model is being taken up by many others across the globe. This archetype will now live on within my soul and await it’s re-emergence in whatever new form when the time beckons. Keith S

Keith has left his mark on history and in the hearts and minds of many people who knew him and others who simply read his works.

Dr Chris James was a resident of Warburton for fifteen years.

She now resides in Gippsland where she is a writer artist and teacher.