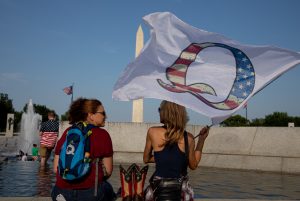 QAnon supporters wait for a military flyover during Fourth of July celebrations in Washington, D.C. Photo: Evelyn Hockstein/The Washington Post via Getty Images. To read the original article go to

For a long time now, I have been suggesting that people look closely at the some of the alternative movements for their extreme and archaic idealism, which has its roots in the German Volk of the 1930s, having drawn its inspiration from the bio-organic commune of the 1800s, which in turn, was deeply involved in the advance of racial purity. In my 2013 book The Deep Green Delusion: Vitalism and Commmunal Autarky, I described how the organics movement is much broader than we imagine and as an exclusive food source it resonates with the ideas of Jorian Jenks who was a founding member of the UK Soil Association and also a member of the British Union of Fascists. The connection between Blood and Soil has a long history. My book, which is now out of print, described how mainstream social protest movements were usurped by a New Age theological cult, which made the environment movement a tool for the ruling elite. These groups separate from middle class radicalism and are deeply nationalist, isolationist and steeped in quasi-religious rhetoric that win hearts and minds through the use of positive psychology. While these groups were able to draw on the need for everyone to significantly change their consumer lifestyle, they also reiterate the ecology of scholars such as the German Ernst Haeckel (1834-1919). In 1971 Daniel Gasman published a detailed account of Haeckel’s work titled Scientific Origins of National Socialism; and Social Darwinism and the German Monist League. Haeckel’s ecology played a key role in the genesis of the Volk and continues to feature is certain green movements today. Haeckel’s ideas led to the notion of closing borders and seizing land for the protection of the bloodlines, this was later embodied into the so-called protection of the environment. By 1968 the mantra was on population control, which was spirited on by Paul Ehrlich’s book The Population Bomb. The work has since been viewed as distinctly racist as Ehrilich floated the idea of temporary sterilants for easing the number of births in the developing world. Without wishing to name groups, movements or institutions, these disturbing Volkish sentiments still remain, but they are better known now for their connection to a cultural spirituality and mysticism, one that does not make the distinction between what is a genuine concern for the planet and its inhabitants and philosophies that have their roots in historical and racial self-interest. Before embarking on any alternative movement I would urge the reading of Madam Blavatsky’s the Secret Doctrine of the Atlantis, with its six root races, the master race being the Aryans, and make sure this philosophy is not being discursively promulgated by what appear to be well meaning social movements.