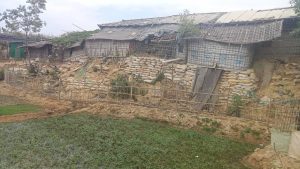 My submission addresses point No. 1

How can international actors improve the response to the crisis in Myanmar?

I am an independent Human Rights Advocate qualified in International and Community Development, Psychoanalysis and Communications.  I am currently living in Victoria, Australia and working online with the Rohingya residents at the Kutupalong, Refugee Camp in Cox’s Bazar, Bangladesh. My submission is focussed on the urgent need to resettle the Rohingya residents (Muslims and Christians) due to the dangerous, unsanitary and inhumane conditions in the Bangladesh camps. I ask the committee to consider the lack of amenities as unacceptable as are and the length of stays in the Bangladesh facility, which for some residents exceeds more than thirty years. I also request that priority be given to resettlement back to the homeland or to another safe place in accordance with the individual wishes of the refugees.

Children have been born and have grown-up in the Bangladesh camps.   They know nothing else and this makes it very difficult to adjust to a world beyond confinement. Notwithstanding, the residents in the camps have maintained a strong connection to the Myanmar homeland, which has been passed on to their children.

In the Rohingya camps of Cox’s Bazar, there are almost one million people in an area of just 13 square kilometres.  34 camps are crammed into this space. The population density ranges between 40,000 to 70,000 people per square kilometre, which is nine times the national average of Bangladesh.[i]  Currently, a large section of the camp has become flooded due to heavy rains and this is a recuring problem. Added to this, much of the area is scattered with hills containing unstable soils that are very prone to land-slides. Three small children have already been buried alive this year (2022).  Last year (2021) the floods claimed 11 Rohingya lives, including four children and 24 lives were lost to landslides.  Also, last year more than 4,000 shelters were destroyed. This came on top of a deadly fire that spread through part of the camp.   Shelters are made of thin bamboo sticks and plastic sheets, which do not withstand the climatic conditions and they are very prone to fires.  Many shelters are sitting in water contaminated with sewage as the toilets are wells that overflow and there is no means of dealing with toxic wastes. Debris, including poisons, cover vast areas of the landscape and there is no means of safe disposal.  With groups of hundreds of people sharing such a small space, including one toilet per group, the contamination of soils and buildings is significant and it poses ongoing health problems, especially for small children.  Added to this, there is a clean water crisis.  In the heat of summer, drinking water is scarce.  Sickness is rife and medical facilities are inadequate. Many of the children are severely undernourished and in need of schooling.  The schools have been closed due to a lack of books, teachers and proper facilities.  There is no freedom of movement, written permission has to be given before anyone can leave or enter the camp. Armed guards patrol the perimeters and the police who wander the grounds are accused of harassing people with racist remarks and intimidation.  With numerous other restrictions, too many to mention, it would be fair to say the facility is more like a prison than a place of refuge.  It is a sad indictment of the way vulnerable people are treated.

Of late, there has been a rapid deterioration of conditions in the refugee camps and hope for a normal life is waning.  This has led to a lot of hostility. The establishment of local gangs has vastly increased the level of violence.  It has been reported that these groups are heavily involved in human and drug trafficking as well as arms smuggling. Reports between August 2017 and 2020 indicate there have been at least 61 killings, 35 incidents of rape and 16 kidnappings. More than 731 First Information Report (FIRs) were filed against the Rohingya during this period, which led to the imprisonment of more than 600 Rohingya.[ii]  Daily reports of violence are now the norm and the environment is extremely tense and frightening. Clearly, the lack of repatriations, poor living conditions and a lack of services have contributed to this scenario, whereby many innocent families no longer feel safe in their shelters. Importantly, people cannot hide behind locked-doors, everything is open to what is happening and many young people are quickly learning how to become criminals.

Most shelters have been standing for many years and they are falling into complete dereliction.  The reality is, donor funds are dwindling and interest in the plight of refugees does not bode well with mainstream populations who are influenced by the political discourse that states ‘groups of refugees might harbour terrorists’. Sadly, since 9/11 and the terrorist attacks on the United States World Trade Centre, sympathy for refugees has diminished greatly due to fears of terrorism.  As we have seen in the western media, when refugees arrive on shores in large numbers, they spark political controversy. [iii]   Clearly, something needs to be done to change public opinion towards refugees who need to be supported in their resettlement and integration within the global communities.  Moreover, when dealing with refugees we must also keep in mind that we are dealing with highly traumatised people.

The way refugees are processed and housed has to change.

(10) Schools in host counties need to include lessons on basic Human Rights and the plight of refugees.

(11) We need to deal with racism through education and integration. (Many organisations have used storytelling).

(12) We need to abolish refugee camps in favour of complete social integration and we   need to avoid the establishment of ghettos.

For the Rohingya the willingness to return to what might be a very insecure homeland is largely due to the lack of opportunity for refugees to exercise any kind of normal life within the camps.  Segregation is a very negative way of dealing with social issues and it quickly morphs into apartheid.

At the time of the 2017 crisis, the Australian Government’s principal response to the crisis has been to pledge humanitarian support for affected populations in Myanmar and Bangladesh. As at 1 June 2018, the Government had committed $51.5 million in assistance to help address the humanitarian needs of Rohingya and affected communities in Myanmar and Bangladesh. Most of this aid, around $44 million; has been directed to the hundreds of thousands of Rohingya in Cox’s Bazar in eastern Bangladesh.[iv] To date, there are only 3,000 Rohingya in Australia.[v] To this end, Australia and others clearly use funds to offload the problem onto the poorest nations and this has to cease.  Further, many refugees who cannot be offloaded elsewhere get processed offshore and locked-up. In Australia, asylum seekers are not considered to be legitimate refugees and other nations are following this lead. With this in mind, the 1951 Refugee Convention has to be strengthened.

More assistance from the international community might change the way refugees are processed. For example, although the UNHCR refers refugees for resettlement the ultimate decision to grant a visa rests with the country’s Immigration Department. Those who are not fully subsidised have to find a huge amount of money to keep themselves for two years in case they cannot work, the sum is roughly $17,000. For most refugees, raising this amount is an impossible task.

If the Rohingya wish to go to western nations then western governments must be encouraged to take them.  Refugees must be permitted to work and support themselves and lead a normal life. The number of refugees Australia accepts has dropped in recent years. Australia accepted and resettled 12,706 refugees in 2018.[vi]  According to the Red Cross, that figure jumped to 18,200 in 2019. During the Morrison Government between 2020-2021 the number fell to 4,558 refugees.[vii] The number of refugees Australia has been willing to take pales against other significantly poor nations.

Repatriation is the ideal. However, if the Rohingya are repatriated, some form of satisfactory policing has to occur and the Human Rights of the Rohingya people need to be restored, including the right to citizenship. What is need here is choice. Refugees must have the right to choose where they wish to be settled. While many refugees will welcome repatriation, this action should not be the only option.