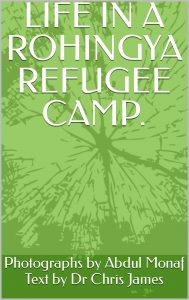 The Rohingya people are an Indo-Aryan ethnic group who predominantly follow Islam  They come from the Rakhine State in Myanmar (previously known as Burma).  In 2017, an estimated 1.4 million Rohingya lived in Myanmar and over 740,000 fled to Bangladesh due to persecution and genocide. Under the 1982 Myanmar legislation the Rohingya are denied citizenship. Restrictions were also were put on freedom of movement, including access to state education and civil service jobs.  The legal conditions faced by the Rohingya in Myanmar have been compared to apartheid. The most recent mass displacement of Rohingya in 2017 led the International Criminal Court investigating crimes against humanity, and led to the International Court of Justice investigating genocide.

Bringing an end to refugee detention.

Every year the UNHCR hold a day of celebration called World Refugee Day. Every celebration is given a title. In 2021 the celebration was titled, “Together we, heal, learn and shine.” To celebrate the day the Kutupalong camp in Bangladesh had a visit from the UNHCR Goodwill Ambassador Mr. Tahsan Khan who was there to open an intensive care unit and diagnostic services at the Sadar District Hospital, which was created with UNHCR funds. These services are undoubtedly needed, but a problem arises when International AID is provided to counties in exchange for temporary refuge because there is no incentive towards refugee resettlement. Indeed, the arrangement makes refugees the collateral for any future material developments, i.e., progress. As a consequence, some refugees have been in captivity for more than 30 years and their collateral status has simply grown and become more valuable for building a nation’s infrastructure. The bigger the camp, the more need for outside services. The regime is tantamount to human trafficking and slavery. Slavery, because the refugees have to maintain their own infrastructure within the camp.

The theme of the 2021 World Refugee Day was “together we heal, learn and shine”, it was a huge ask in an environment where people have a day-by-day struggle to survive. The aim to “heal, learn and shine” is all well and good, but we need to ask whose interests are really being served? In order to maintain this arrangement, the camp has to grow, this means more refugees are needed. More refugees will always be needed in order to secure funds for more outside infrastructure… This is how it works! It is a trade-off that most people appear to be happy with, except for the fact that refugees are never going to escape this system. Refugees will dwindle out and more will replace them. Refugees will never be truly free to build their own lives under this system.

In 2022, once again, another Refugee Day took place.  This time the public are asked to engage with Refugee Day and its new aspirations. We are asked to remember what has been achieved. What has been achieved? We can reflect of the fact that nothing has changed, refugees are still imprisoned in outrageous conditions. The controls in camps have tightened and the environment has become ever-more dangerous. The mental health of residents has deteriorated. Many health services are not free and most are not afordable. What has changed? No one can leave the camp without a pass. Close associations are watched by guards. Residents have to rely on charities for books and learning. The guards in their posts have nice bright uniforms and up-to-date weaponry while people are dying of treatable diseases and children risk injury from a lack of basic checks for health and safety. In 2022 a four-year-old child was buried alive under a landslide. Just a few weeks later two more children were buried alive during flooding. Remarkably, some people do “shine” because they still have faith in humanity and they are able to develop an extraordinary power of will. However, no one should have to live like this, it is systemic torture and against International Law.   Free refugees!

Refugee camps are a system of segregation, This is apartheid.  No one in a refugee camp is permitted to move beyond the barbed wire fencing. Residents are faced with a life of entrapment as is revealed in the images contained in this book. There are smiles and tears in the images of residents, but none can fully appreciate the day-by-day hardship that can easily fall to despair. As a consequence, the camp has given rise to a host of very good photographers. The camera captures the life inside because it is the only way daily life can be revealed to the outside world.  What is shown will shock those who care about people and in particular those who care about Human Rights.  The pictures of children are often painful. Yet, at the same time, they will hopefully heighten the sensitivities to the needs of these prisoners.  No one can fail to be moved by the pictures of people clinging to the wire fences.  We are reminded of animals caged in zoos or perhaps a mass social experiment that has gone horribly wrong.

Some of the images show people trying to hurry passed guards for fear of being interrogated. Some are assaulted, beaten.  The fear is written of the faces on innocent bystanders who can neither do or say anything to stop the brutality of their friends. The outcome is one of misery, uncertainty and an inevitable high rate of mental health issues and suicides.

The Kutupalong refugee camp in Cox’s Bazar is mostly inhabited by Rohingya refugees who fled from ethnic cleansing, genocide and religious persecution in Myanmar. Two years ago, more than 730,000, mainly Muslim Rohingya escaped into neighbouring Bangladesh to avoid persecution in Myanmar. They arrived in Kutupalong where they joined 250,000 Rohingya who were already resident in the camp. In 2019 Myanmar agreed to allow 3,450 refugees to return to their homeland, but many refugees feared the ongoing violence and refused to go back. Today, refugees at Kutupalong are in constant fear of being sent back to their homeland to face more violence, but at the same time, they want to go back and are demanding that the international community protect them. The fact remains, these residents should have been resettled in countries where they could start a proper life and expect a good future.  Instead, within the camp, conditions are also becoming more violent. Refugees are facing an ever-more authoritarian regime and difficulties in meeting basic needs. This is resulting in serious mental health problems in some cases it is resulting in suicides.

Suicide and associated behaviours have a profound impact on individuals, families and communities. The World Health Organization estimates that approximately 800,000 individuals die by suicide each year – the equivalent to one person every 40 seconds. Globally, the death by suicide rate is estimated to be approximately 11.05 deaths per 100,000 people. It is the second leading cause of death worldwide for young people aged 15‐29.  .  (Reuters Foundation Wednesday, 21 August 2019).

There are a limited number of studies that have examined suicide and related behaviours among displaced populations. A review of suicide in refugee populations found suicide rates to range from 3.4% to 34% of recorded deaths.  Studies done with refugee populations resettled in high income countries have shown increased risk of suicidal behaviours likely due to a combination of socioeconomic disadvantage, exposure to potentially traumatic events, the burden of mental disorders and lack of appropriate care. The disparity between rich and poor increases the likelihood of suicides.

As the vast majority of the world’s population live in low -middle incomes countries, suicides in these countries represent 75% of suicide deaths worldwide. The number of refugees and others forcibly displaced worldwide is growing with a record high of 84.4 million people and many suffering mental health problems. With these figures the suicide rate is bound to rise inside and outside the walls of refugee camps.