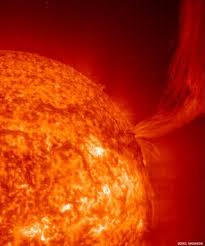 The Qur’an tells us that Allah the Almighty created the sun which is a sign that indicates the Power and the Mercy of Allah. Allah says in Surah 24 Al-Nur (The light): Allah alternates the night and the day. Indeed, in that is a lesson for those who have vision.1

The Qur’an has disclosed information about many scientific aspects including the planetary motions of sun, earth and moon. It has been reported that between the eighth and twelfth centuries AD, when development in science was restricted in the Christian world, a large number of studies and discoveries were made at Islamic universities. It was said that the Calif’s library at Cordoba contained 400,000 volumes and Greek, Indian and Persian sciences were taught.2 The scientific considerations that appear in the Qur’an are highly accurate in nature and in line with today’s modern science.

Accordingly, in Islam, whether everything in this universe is observable or not, it is under the writ and guidance of Allah (Subhanahu wa ta’ala (SWT)), which translates as “Glory to Him, the Exalted” As the Prophet Muhammad (Peace be Upon Him (PBUH)), said literally or philosophically… that Sun goes (i.e. travels) till it prostrates Itself underneath the Throne and takes the permission to rise again, and it is permitted and then (a time will come when) it will be about to prostrate itself but its prostration will not be accepted, and it will ask permission to go on its course but it will not be permitted, but it will be ordered to return whence it has come and so it will rise in the west).3

When the Earth’s magnetic poles shift, North to South, it is said that the East would be the West and thus the sun would rise in the West. The process of the pole shift is called a geomagnetic reversal or a change in a planet’s magnetic field such that the positions of magnetic north and magnetic south are interchanged (not to be confused with geographic north and geographic south). The Earth’s magnetic field has alternated between periods ( These periods are called chrons) of normal polarity in which the predominant direction of the field was the same as the present direction, and reverse polarity, in which it was the opposite. In recent years, hypotheses have advanced toward linking reversals to mass extinctions. The end of superchrons have caused vigorous convection leading to widespread volcanism, and the subsequent airborne ash caused long periods of darkness, leading to extinctions. As the Earth’s magnetic field would also be much weaker during such reversals, high-energy particles trapped in the Van Allen radiation belt could be liberated and able to bombard the Earth, which would be exposed to radiation infiltration without the existing strong magnetic field to protect it. Detailed calculations confirm that if the Earth’s dipole field disappeared entirely (leaving the quadrupole and higher components), most of the atmosphere would become accessible to high-energy particles, and cosmic ray collisions would produce secondary radiation in the atmosphere of beryllium-10 or chlorine-36. This would be fatal to life on earth, and potentially it would destroy most life forms in what could be considered the final hours.4 Scientists therefore claim that the geomagnetic reversals could be cataclysmic leading to the extinction of life. In simple language this could be explained through the prediction of the rising sun in the West, as described in Islam. It has been suggested that the flipping of the Earth’s poles together with a drop in the solar activity 42,000 years ago could have generated an apocalyptic environment that may have caused the extinction of the megafauna and the end of Neanderthals. 5

The Earth’s magnetic field acts as a protective shield against damaging cosmic radiation, but when the poles switch, as has occurred many times in the past, the protective shield weakens dramatically and leaves the planet exposed to high energy particles.

One temporary flip of the poles, known as the Laschamps excursion, happened 42,000 years ago and lasted for about 1,000 years. Previous work found little evidence that the event had a profound impact on the planet, possibly because the focus had not been on the period during which the poles were actually shifting. Now scientists say the flip, together with a period of low solar activity, could have been behind a vast array of climatic and environmental phenomena with dramatic ramifications. According to Prof Chris Turney of the University of New South Wales and co-author of a study, “it probably would have seemed like the end of days”.6

3 When writing the name of God (Allah), Muslims often follow it with the abbreviation “SWT,”