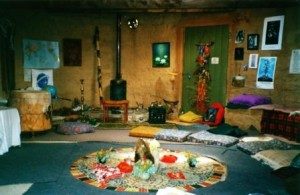 Junitta Vallak passed away on the 12 of December, 2019 and she will be sadly missed.

I first met Junitta in the early 1980s.  She had retired as an art teacher and was living on a property at Maldon in Central Victoria.  Out of the dry and dusty farmland Junitta and her husband had carved a magnificent place of healing, which they called Casuarina.  It was named after the tree (also known as the she-oak) because the Casuarina was said to have sonic qualities that relate to the sound of the singing earth.  It was a place for peace.

Junitta and her husband built the first Peace Chamber in Victoria.  There were Peace Chambers around the globe and the couple visited most of them. The aim was to have all the Peace Chambers inter-connected for the purpose of healing the Earth. Junitta’s goal in life was to heal what needed to be healed.  She was an active environmentalist, a geomancer, a member of the inter-faith movement and an advocate for Aboriginal Rights.

At the time of Casuarina’s inauguration, I was working with women in crisis and I had organised for a small group to visit the Maldon Peace Chamber for the weekend. As soon as we turned off the main road towards the property, there was something very special about the location. It had been chosen carefully, it was the home of the Jarra people and it was a sanctuary where everyone could feel welcome regardless of religion, race or creed.

Junitta had a very close affinity with Aboriginal people and she was constantly drawn to Australia’s red centre for meditation and spiritual guidance.  However, this affinity was not limited to one nation. Junitta supported the cause of Aboriginal Rights across the world.

Open a conversation with Junitta and it would generally turn to the topic of Aboriginal knowledge or the placement of ley lines upon the Earth.

The Casuarina Peace Chamber rested on the crossing of ley lines and their vortex.  Above the vortex there was a large Aboriginal healing crystal. I remember thinking, it was the most magnificent crystal I had ever seen. Surrounding the crystal there was a mystical mosaic in the shape of a lotus. People would sit in a circle around the lotus awaiting instruction.  Junitta would tell of her travels and of her experiences with the Native American Indian Joseph Rael, also called Beautiful Painted Arrow.  Junitta studied with Joseph and they became close friends. Later Joseph visited Australia for the official opening of Casuarina and the healing sanctuary.  It was the first time a Native American Indian had set foot on the land and together with local Aborigines it made for a splendid token of indigenous unity.  Junitta was all about unity.

Junita was a teacher of the arts and of the mystical cultures and it made for some wonderful conversations between us. She had studied the Holy books of just about every belief and religion and she always reminded me, when I mentioned the word “God”, not to forget the Goddess.  People called her “the goddess of Gippsland.”

Whether one believed in the mysteries or not, everyone who visited Casuarina marvelled at its creation. Hundreds of trees were planted on the land as an example of Junitta’s love for the environment and nature.  She liked to walk in nature, especially among the banksias of our region.

Junitta was truly an advocate for peace and she was a great inspiration to the up and coming generations.   In 2018 she had her final exhibition at the Stockyard Gallery with her great god daughter Skylar Farley who was eight years old at the time.  The exhibition was called “A Cosmic Exhibition of the Rainbow Serpent and the Comet Venus” and it represented every aspect of Junitta’s thinking; that we should better honour the marvels of the world.

The generations exhibiting work together was another way Junitta would spread her message of peace, compassion and understanding. Her motto was “learn by teaching” so wherever she went she shared her knowledge and she was, without doubt, an excellent teacher.

When Junitta finally left Casuarina and moved to Gippsland her work for peace did not stop. Her sanctuaries in Gippsland were a small cottage in the green hills, Wilsons Promontory and the Foster Community House.  She loved the majesty of the hills, the sea, the sky and the universe and she loved people.

I spent many happy hours with Junitta, sometimes it was just over coffee in Foster. Sometimes a drive through the country.  There was always something new to talk about.  Junitta was a highly accomplished artist and literary scholar who created art and poetry of the highest calibre.   She had an innate sense of humour and was known for her one-line jokes.

Junitta was fascinated by the role of Angels in the various traditions. In one section of her book “Angelology”, she quotes the Book of Exodus  23.20 “See, I am sending an Angel ahead of you to guard you along the way.” Junitta has been a guarding angle for many and now, I hope she has an Angel guarding her into the ultimate sanctuary of peace.