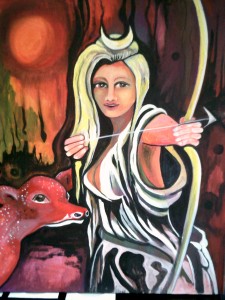 Astarte (Heb: Ashtoreth), (Bab: Ishtar), was a fertility goddess who also enjoyed regal and matronly aspects. The prominent deity Eshmun of Sidon developed from a chthonic nature for agriculture into a god of health and healing. Associated with the fertility and harvest myth widespread in the region, in this regard Eshmun was linked with Astarte; other like pairings included Ishtar and Tammuz in Babylon, and Isis and Osiris in Egypt.  The name Baal Hammon (BL HMN) has attracted scholarly interest. The more accepted etymology is to “heat” (Sem: HMN). Modern scholars at first associated Baal Hammon with the Egyptian god Ammon of Thebes, both the Punic and the Egyptian being gods of the sun. Both also had the ram as a symbol. The Egyptian Ammon was known to have spread by trade routes to Libyans in the vicinity of modern Tunisia, well before arrival of the Phoenicians. Yet Baal Hammon’s derivation from Ammon no longer may considered the most likely, as Baal Hammon has since been traced also to Syrio-Phoenician origins, confirmed by recent finds at Tyre.  Baal Hammon is also presented as a god of agriculture:  Baal Hammon’s power over the land and its fertility rendered him of great appeal to the inhabitants of Tunisia, a land of fertile wheat- and fruit-bearing plains.  In Semitic religion El, the father of the gods, had gradually been shorn of his power by his sons and relegated to a remote part of his heavenly home; in Carthage, on the other hand, he became, once more, the head of the pantheon, under the enigmatic title of Ba’al Hammon. [1]

Over time the original Phoenician exemplar developed distinctly, becoming the Punic religion at Carthage.  The Carthaginians were notorious in antiquity for the intensity of their religious beliefs.[2]   Besides their reputation as merchants, the Carthaginians were known in the ancient world for their superstition.  They imagined themselves living in a world inhabited by supernatural powers which were mostly malevolent. For protection they carried amulets of various origins and had them buried with them when they died. These traditions would find their expression across England in groups of Wiccan pagans (Witches).Similarly, diaspora Jews also sent material support for the second Temple in Jerusalem until its fall in 70 CE. Cf. [1]