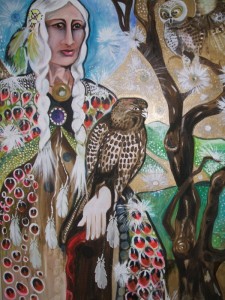 Art speaks to the notion of liberation.  However, understanding the ancient symbolic messages left by our ancestors has posed a riddle for science. How do we explain the incongruity of the evolutionary findings? Science now suggests that  ‘tool-making… can be pushed back at least two million years’ whereby ‘modern tool kits emerged very gradually over 300,000 years in Africa.’ Conversely ‘Neanderthals are now known to have had brains that were bigger than ours and to have inherited the same genetic mutations that facilitate speech as us. Yet, despite surviving until 30,000 years ago, they hardly invented any new tools…’   It would seem then that ‘it is quite possible to be intelligent and imaginative human beings’ [Neanderthals buried their dead] ‘yet not experience cultural and economic progress.’[i]  What was absent from these societies was vision and a form of interaction that was based on interaction and past knowledge.    As Brian Arthur argues in his book The Nature of Technology,’ nearly all technologies are combinations of other technologies and new ideas come from swapping things and thoughts.[ii]   That said, the historian Christopher Lasch has noted our dependence on what went before has reached a point where there is a sense of everything coming to an end. ‘The sense of ending’ states Lasch ‘has given shape to much of the twentieth century literature’ and feelings of a dystopia.

The Nazi Holocaust, the threat of nuclear annihilation, the depletion of natural resources, well founded predictions of ecological disaster have fulfilled poetic prophecy giving concrete historical substance to the nightmare, or death wish, that avant-garde artists were the first to express.[iii]

The vision of avant-garde artists is still with us, but in modern competitive societies where productivity is everything, materialism and the quest for creative vision that is rooted in survival poses a deep psychological schism.   As Lasch states humans have developed a culture of narcissism.  Humans have lost the vision of a Golden Age.

The contemporary climate is therapeutic, not religious. People today hunger for personal salvation, let alone for the restoration of an earlier golden age, but for the feeling of momentary illusion, of personal well being and heath and psychic security.[iv]

Lasch goes on to describe how the radical politics of the 1960s filled empty lives, it gave people purpose, but it was never enough.  The weather has more impact on well being than politics.[v]   Environments and the emotions they arouse play a crucial role in well being as well as the ability to adapt to what we cannot control.   Progress in the modern world is a well thought out systematic process that depends of positive, visionary creation that is the outward expression of internalised feelings and emotions.