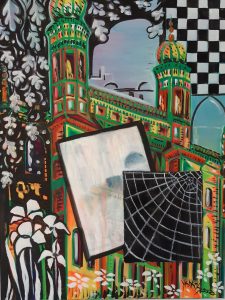 I saw the realm of joy and pleasure.

no religion, no blasphemy,

no conviction or uncertainty remained.

In the middle of my heart,

and the seven heavens were lost in its brilliance.  Rumi.

In the words of physicist Lawrence Kraus, we all come from star dust. What this means is the very same components that give rise to stars and planets have also given rise to humans and all other life forms.

I have always been fascinated by the intuitive urges that cause people to refer to such ephemeral things as star dust.  Where does star dust sit in the unconscious?

All religion appears to have a place in the unconscious.  The power of belief contributes to human survival.  It helps us deal with anxieties and traumas and it gives hope and joy to many aspects of life. The reverse is also true; belief can be very destructive; much like the life and death of a star.

I am excited that science is now recognizing these very human yet mysterious traits as part of a universal pattern of cosmic evolution. I am excited by the idea that our world may just be a hologram, a beamed image from the out universe where all knowledge is gathered possibly around the circumference of black holes.

I am longing to know more about dark energy and whether it can have a correlation to the dark unconscious that Sigmund Freud described so many decades ago. Knowledge is the ‘realm of joy and pleasure’.